TORONTO, June 30, 2022 /CNW/ – O3 Mining Inc. (TSXV: OIII) (OTCQX: OIIIF) ("O3 Mining" or the "Corporation) is pleased to announce it has received results and interpretation from its 6,338 metres drilling campaign on the Camflo Extension deposit, on the Marban Project in Val-d'Or, Quebec, Canada.

The Camflo deposit was first discovered in 1962 by Camflo Mines, and was in production for 30 years from 1962 to 1992. It produced a total of 1.89 million ounces of gold from 10.3 million tonnes of ore grading 5.7 g/t Au. From this amount, 0.24 million ounces of gold were extracted within the current O3 Mining Marban project claims (Source: QERPUB-M.E.R. Publication DV93-01 Rapports des Géologues Résidents sur l'Activité Minière Régionale, 1993). Historically, gold production was mainly restricted to the Camflo Plug, a cigar shaped quartz-monzonitic intrusion that plunges 60° towards the north-east. Although the Camflo plug at surface is outside O3 Mining's property claims, the extension of the plug and the mine below 800 vertical metres is within the Marban project, as it plunges toward the north-east.

Exploration efforts by O3 Mining aimed to test the depth extensions of the historic Camflo deposit, as well as test for additional high-grade zones. A total of 6,338 metres in 2 drill holes and 3 wedges were drilled on the Camflo Extension, with results summarized in Table 1. Assay results are pending for hole O3MA-22-254-W1.

O3 Mining's President and Chief Executive Officer, Mr. Jose Vizquerra commented, "The Camflo mine was the first mine from which Barrick Gold started its successful journey, and was stopped due to a challenging gold price environment but not due to a lack of ore. O3 Mining owns 100% of the Camflo Extension deposit which we successfully tested and verified that it remains a rich mineralized area at depth. We believe more drilling in this area will unveil its full potential, however, it demands more financial resources which we are allocating to our current brownfield drilling at Marban Engineering to maximize returns to our shareholders."

O3 Mining drilled two-parent holes with one and two daughter branches that successfully intersected the plug at the predicted depth. All branches intercepted a very wide envelope of mineralization mainly located on the northern side (hanging wall) of the plug with discrete high-grade intercepts. The best results came from hole O3MA-22-253-W1 which returned 1.1 g/t Au over 94.3 metres with a high-grade interval that yielded 13.8 g/t Au over 1.1 metres. 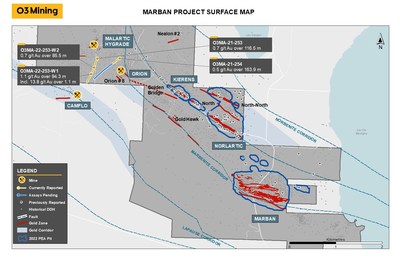 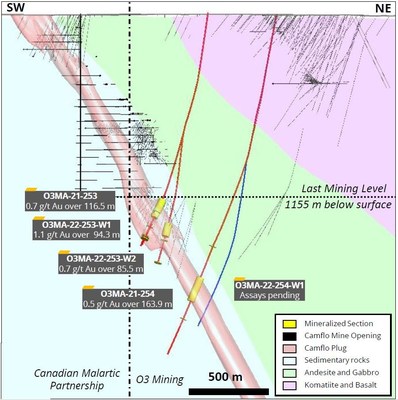 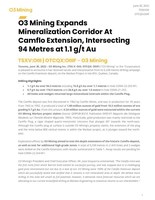