TORONTO, Jan. 19, 2023 /CNW/ – O3 Mining Inc. (TSXV: OIII) (OTCQX: OIIIF) ("O3 Mining" or the "Corporation") is pleased to announce the commencement of the exploration drilling program at Marban Regional. The drilling program will consist of 9,300 metres to test for gold targets in this underexplored part of the property covering approximately 5,000 hectares.

"After an extensive field season of compilation work, soil sampling, and geophysical surveys in 2022, we are very excited to have initiated drilling at Marban Regional. This is a vast underexplored area, offering lots of potential for discovery, especially along the same shear structures that host the Marban and Norlartic deposits", said O3 Mining President and Chief Executive Officer, Mr. Jose Vizquerra.

Highlights:
Magnetic features similar to the Marban and Norlartic signature along the Marbenite and Norbenite shears

In Q1-2022, a high-resolution drone mag survey was completed to help identify the northwestern extent of the Marbenite and Norbenite shear zones. The characteristic low-mag signature of the Marban and Norlartic deposits were identified along these structures and will be drill tested. Furthermore, a soil sampling campaign totalling 4,411 samples was completed. Assay results from the soil sampling program reveal numerous gold-in-soil anomalies in underexplored areas.

Follow up work will be initiated on significant historic drill intercepts by Niogold Mining Corporation at the Ludovick mineral occurrence along the Parfouru fault and within the Cadillac and Timiskaming sediments contiguous to the Canadian Malartic mine property. The Ludovick occurrence is associated with quartz–tourmaline–arsenopyrite veins along the Parfouru fault and correlates with corridors of anomalous gold and arsenic values from the 2022 soil survey. A previous drilling campaign by Niogold Mining returned many significant intercepts within the area (Press Release, November 6, 2012, Sedar Issuer Profile: Niogold Mining) The scientific and technical content of this news release has been reviewed  and approved by Mr. Sébastien Vigneau (OGQ #993), Principal Geologist of the Corporation, who is a "qualified person" within the meaning of National Instrument 43-101 – Standards of Disclosure for Mineral Projects.

O3 Mining Inc., an Osisko Group company, is a gold explorer and mine developer on the road to produce from its highly prospective gold camps in Québec, Canada. O3 Mining benefits from the support, previous mine-building success and expertise of the Osisko team as it grows towards being a gold producer with several multi-million-ounce deposits in Québec. 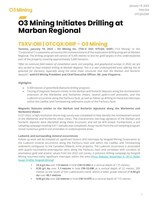