TORONTO, Dec. 22, 2022 /CNW/ – O3 Mining Inc. (TSXV: OIII) (OTCQX: OIIIF) ("O3 Mining" or the "Corporation") is pleased to announce it continues advancing its Marban property in Val-d’Or Quebec, Canada, with exploration efforts focused on expanding the life of mine of the Marban project, as well as providing results from its 2022 infill and exploration drill program.

Unlocking growth potential at Marban – Expanding the Life of Mine ("LOM")

"2023 will be an ambitious year for O3 Mining as we work towards completing the Marban Engineering Feasibility Study ("FS"), as well as engage in exploration activities to unveil Marban’s growth potential over our 8,500 hectares property across the railroad from a world class deposit such as the Canadian Malartic Mine. Marban Engineering is a robust standalone project that can add more value to its NPV of C$463 million by discovering new ounces to extend the LOM. For every additional year of production (160,000oz Au), the impact on the fundamental value is between C$80 million to C$100 million.The more ounces added, the more value added to the project, therefore preparations are well underway for drill campaigns at Marban Engineering and Marban Regional, as well as compilation work from our summer soil sampling and channel sampling campaigns as we boost our exploration efforts.", said O3 Mining President and Chief Executive Officer, Mr. Jose Vizquerra.

Table 1: Infill Drill Hole Intercepts (only intercepts above 20.0 g/t Au*m are reported, cut-off 0.3 g/t Au in or near pit shells)

Table 2: Near Surface Exploration Drill Hole Intercepts (only intercepts above 5.0 g/t Au*m are reported, cut-off 0.3 g/t Au and above 200m from surface) 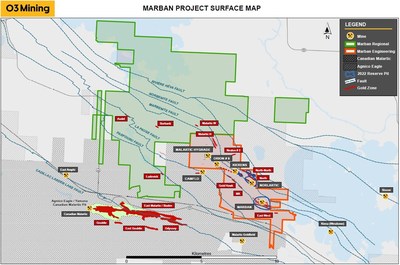 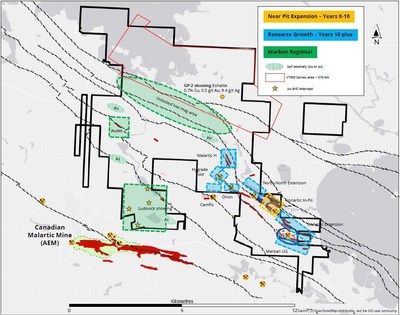 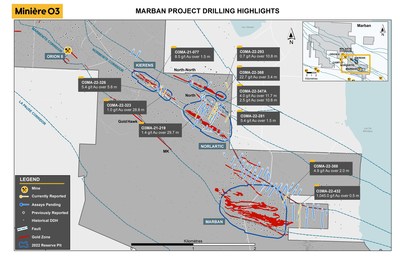 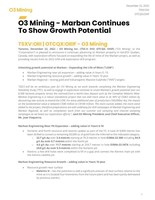